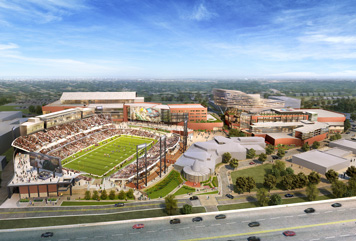 Exciting progress is being made every day at Johnson Controls Hall of Fame Village, an $899 million mixed-use development of the Pro Football Hall of Fame’s campus, under way in Canton, Ohio. It will be the first-ever sports and entertainment “Smart City.” Ten major components will be integrated through technology to subtlety and seamlessly share the values from the Game – commitment, integrity, courage, respect and excellence – with guests in a way that will impact their lives.

Investors believe these efforts will catapult the center, built in 1963, into becoming the theme park destination of the future welcoming NFL fans and players alike; a “Disney World of Football.” U.S. President and business mogul, Donald Trump agreed saying on his tour of the property: “It looks like it’s going to be just a tremendous success… You have a wonderful developer.”

As master developer for Johnson Controls Hall of Fame Village, Industrial Realty Group coordinates support from the combined public and private efforts of the Pro Football Hall of Fame, Canton Chamber of Commerce, Canton’s Mayor, Canton City Schools and the Stark County Convention & Visitors’ Bureau. The venture is expected to become the largest tourism investment in the State of Ohio’s history.